You will be unsurprised to read that not much has changed here at CICERONI since my last newsletter.  Your continued patience and expressions of support are much appreciated.  We are dealing with cancellations and refunds as and when tours are cancelled, whilst hoping for some indication of the possibility of running tours later this year.  We are heartened by those clients who have transferred deposits and balances to future tours - it will certainly help ensure our survival into next year.

Meanwhile, our garden is increasing in terms of growth with some lovely plants coming into flower, such as the Meconopsis ‘Kilbryde Castle White’ pictured above.  These Himalayan poppies are not always easy to grow as they usually require damp, dappled shade with many varieties preferring acid soil.  We have created a small raised acid bed for these and other acid-loving plants, with others planted in pots made up from ericaceous compost, John Innes No 3 and lots of leaf mould.  Scottish nurseries are amongst the best sources for unusual varieties so a trawl through the web is sure to offer temptations to order just now? I’m afraid I cannot remember the source of the plant above, but it was a nursery somewhere north of Coldstream and south of Dalkeith!

We are often asked ‘how big’ is our garden? In fact it is quite small, but there is a lot packed into it, probably too much given its size. So for those who have never been here, Stephen shot a short video in evening light last weekend and we hope this might give you a sense of its scale and planting. Since this was taken our first roses have come out and the tree peony ‘Joseph Rock’ has burst into bloom, wonderful for me as I am normally away on tour at this time of year.  You can view the video on youtube here. 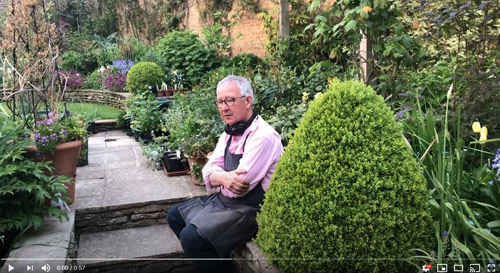 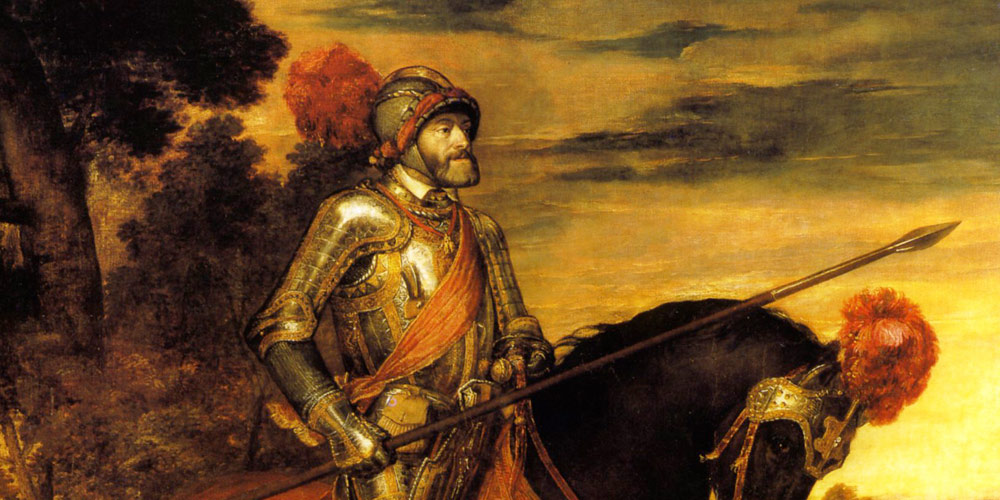 I mentioned last time that we were in the midst of rescheduling some of this year’s ‘lost’ tours to next year such as those to Florence and Rome, while including some new tours which were already in the planning ‘pipeline’ such as Madrid.  Some of these are now on our website and this month I would like to give you details of three, kicking off with Habsburgs & Bourbons: Connoisseurs’ Madrid & Toledo, 14 – 20 February 2021.

The Habsburg family must be the most important dynasty of royal collectors we have? Divided between Madrid and Vienna, and other great cities once under their control such as Brussels and Prague, their patronage represents an amazing heritage of buildings and works of art, both commissioned and inherited.  Via a complex series of marriages the family came to rule not only in their heartlands in and around the Alps, but also in the Low Countries, much of central Europe, plus Spain and Portugal, helped by the wealth of the ‘New World’.  Its first great collectors were the Emperor Charles V of the Holy Roman Empire and his son, King Philip II of Spain.  Early next year we shall spend a week each in Vienna in early January (with further details to come in the June newsletter) and Madrid a few weeks later. 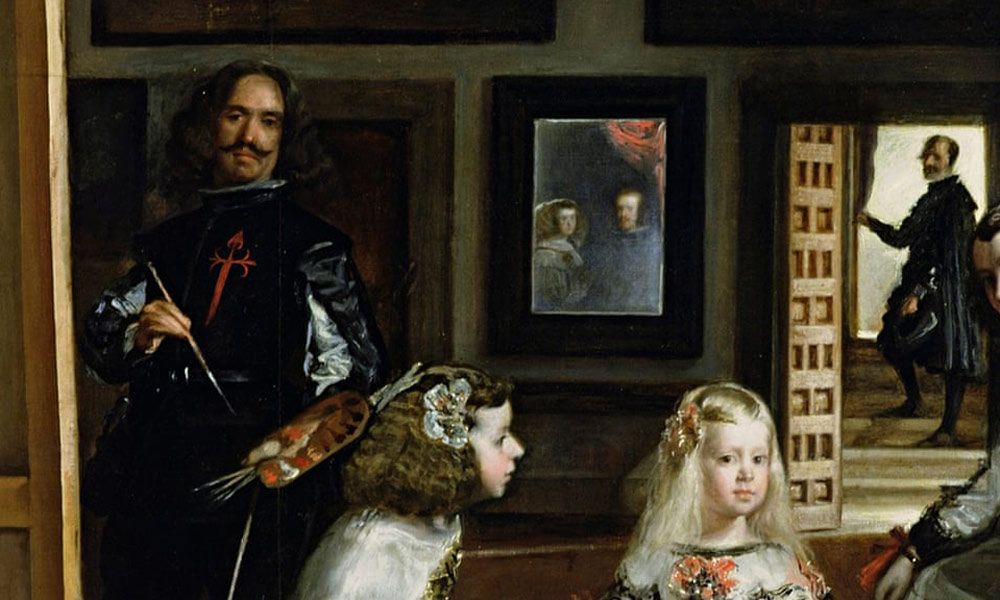 Madrid became the capital of Spain under Philip and both he and his Habsburg and Bourbon successors added to the dynastic collections assiduously over the centuries: Titian, Rubens, Van Dyck, Velázquez, Goya and many others are all represented in it.  The finest of these are now in The Prado and unsurprisingly this gallery will be a focus of our attentions with no less than three visits, all timed to begin at 9 am when the museum is closed to the public - its galleries empty of tourists and allowing us to see, for instance, Bosch’s Garden of Earthly Delights and Velázquez’s Las Meninas in private. 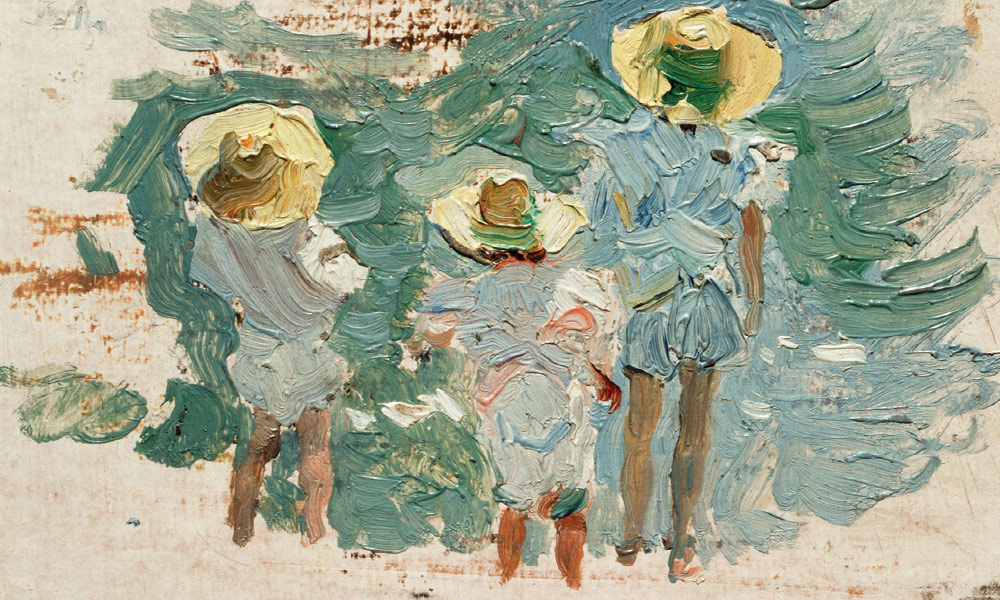 Our main theme of royal collecting will be supported with visits to two of the former occupied royal palaces, the austere Escorial and lighter, Rococo inspired Aranjuez.  We are also fortunate in being able to visit the most important private art collection in Spain, that of the Dukes of Alba, with the bulk of it held in their splendid Palacio de Liria.  These visits, together with others to the Reina Sofia, the Thyssen Collection and the enchanting Museo Sorolla and a day spent in Toledo, will together form a most remarkable week.

Rather surprisingly, one area not well represented in Spanish collections is Italian paintings from the early Renaissance, above all from Florence.  Luckily, this need not be a worry for us as Paula Nuttall will lead one of our regular introductions to the city with Patricians & Patronage: Florence & The Early Medici, 24 February – 1 March 2021. 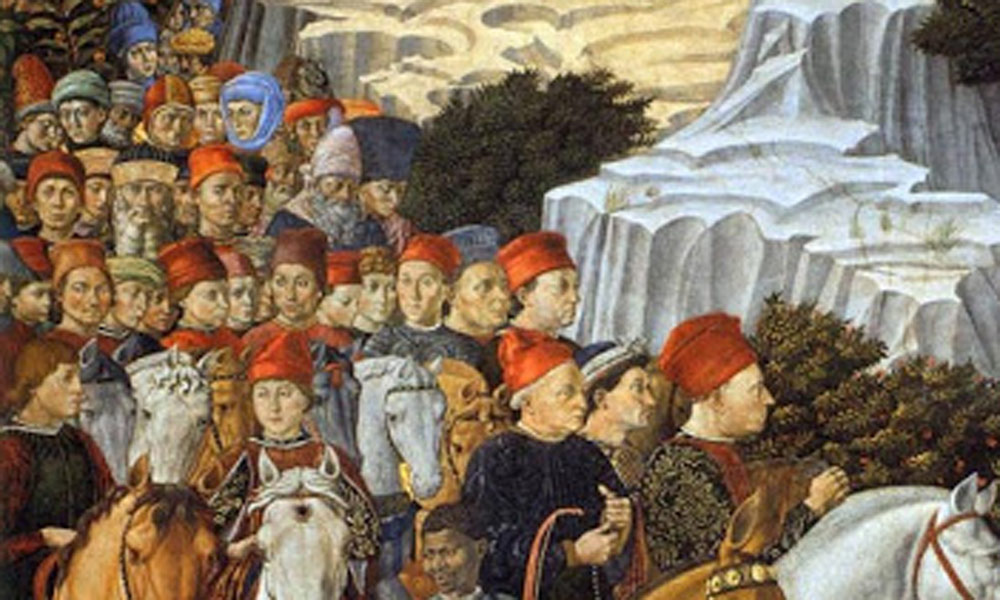 The Medici family are synonymous with Florence and with the birth of renaissance art.  Rising to power in the early 1400s, thanks to the enormous wealth of their international banking network, they were effectively the rulers of the Florentine republic.  They were swift to recognise the value of art as propaganda, harnessing the skills of the greatest artists of the day to reflect their status and prestige, as well as to beautify their city.  Focusing on the era of the early Medici, this tour will explore the monuments, churches and museums of Florence, looking at some of the masterpieces created for successive generations of the family.

The Medici family are synonymous with Florence and with the birth of renaissance art.  Rising to power in the early 1400s, thanks to the enormous wealth of their international banking network, they were effectively the rulers of the Florentine republic.  They were swift to recognise the value of art as propaganda, harnessing the skills of the greatest artists of the day to reflect their status and prestige, as well as to beautify their city.  Focusing on the era of the early Medici, this tour will explore the monuments, churches and museums of Florence, looking at some of the masterpieces created for successive generations of the family.

The list of architects, sculptors and painters employed by the family is astounding; so too the variety of buildings in and around Florence which either they directly funded, or contributed to in some fashion.  These include Brunelleschi’s Old Sacristy at San Lorenzo – a family mausoleum; Fra Angelico’s mystical frescoes at San Marco, the friary funded by Cosimo for the salvation of his soul; the Medici Palace, the first domestic building to revive classical forms with Benozzo Gozzoli’s jewel-like Chapel of the Magi within; Donatello’s bronze statue of David, which once graced its courtyard; and Botticelli’s lyrical mythological paintings The Birth of Venus and Primavera.  These are just a handful of the masterpieces to be encountered on this five-day visit, specifically designed to bring some of the best-loved works of the Renaissance into sharp relief. 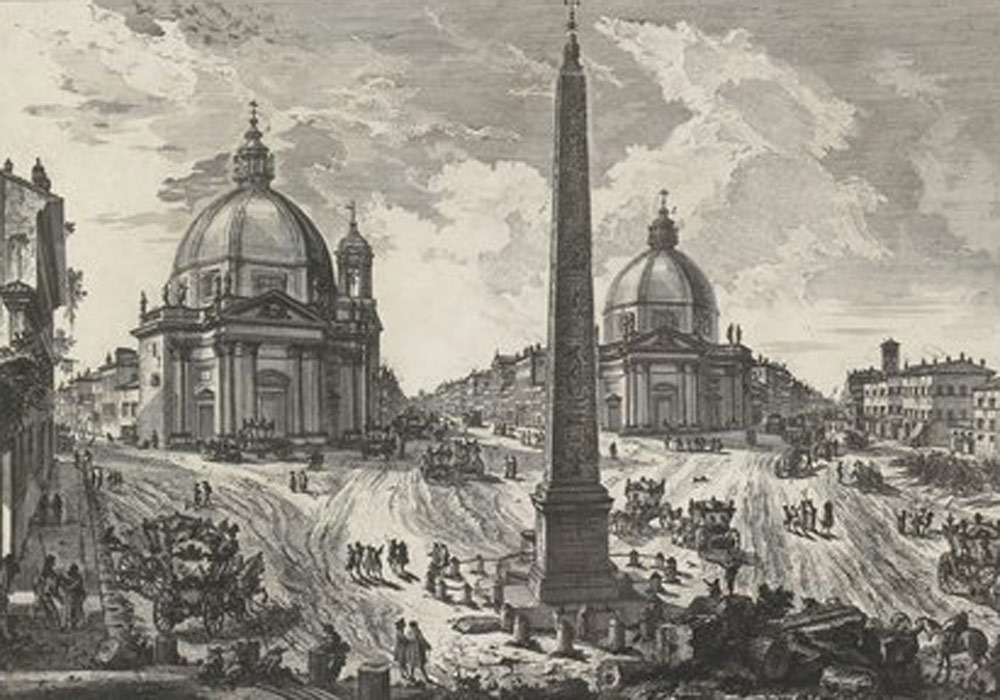 2020 marks the 300th anniversary of the birth of Giovanni Battista Piranesi (1720 – 1778) and I hope you managed to see the small, but exciting exhibition of his original drawings which was at the British Museum, cut short due to the present crisis? Piranesi was one of the most important figures in eighteenth century Rome and was known to every ‘Grand Tourist’ who visited the city in his day, not least because most returned home armed with examples of his superlative engravings of its topography, both ancient and modern.  He will be a major presence throughout the next version of what is undoubtedly our most popular Italian tour, Behind Closed Doors: Connoisseurs’ Rome, 2 – 7 March 2021.  One of the many private visits which will pepper our week will be the only building designed by Piranesi, the lovely church which is in the grounds of the Aventine Hill villa used by the Knights of Malta and the Order’s Grand Master. 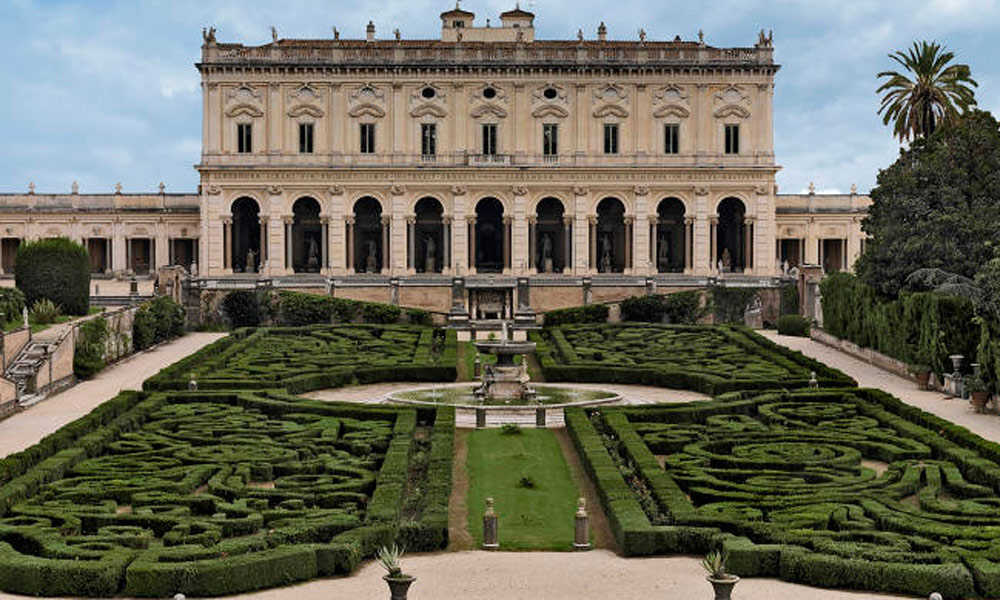 Amongst Piranesi’s immediate circle would have been Cardinal Alessandro Albani, nephew of Pope Clement XI.  The Cardinal was the leading arbiter of taste in the city and a noted collector and diplomat, an unlikely and keen supporter of the Hanoverian succession in England.  His famous villa and its collection of antiquities was a ‘must see’ on everyone’s list, but alas, since the villa passed into the ownership of the Torlonia family it has been very firmly ‘not available’.  However, the doors have opened, just a little, and for the first time we have secured access to this remarkable ensemble, a veritable dream come true for ‘connoisseurs’? 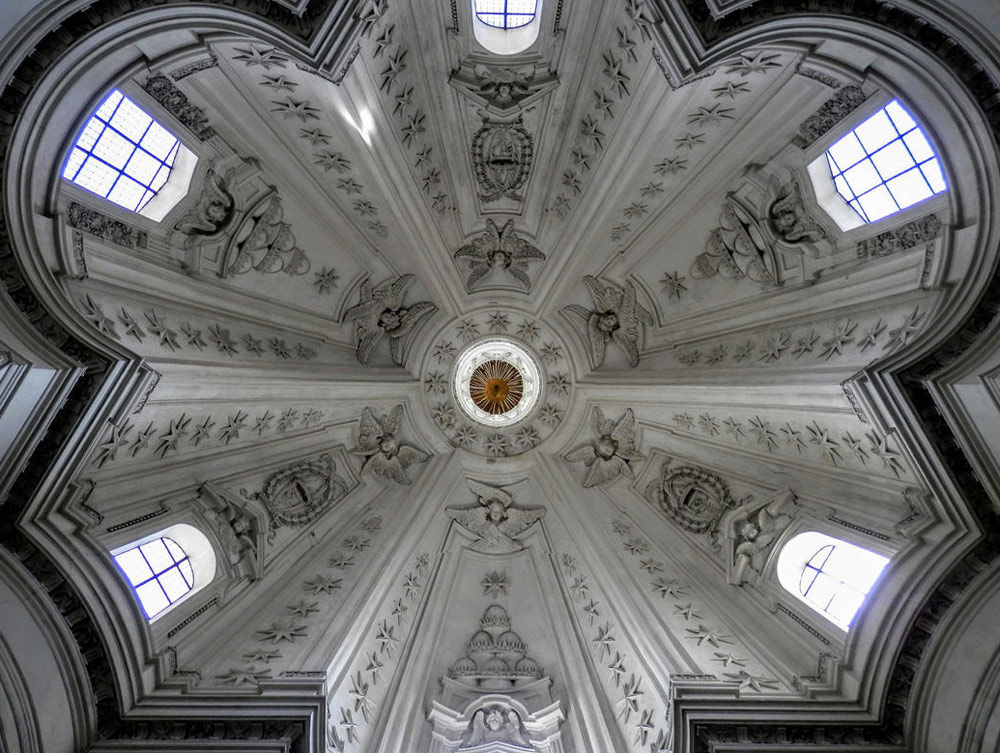 Of course we have also included all our usual private explorations of the Villa Farnesina, Palazzo Colonna and the Vatican Museums for our regular night-time visit to see Raphael’s Stanze and Michelangelo’s Genesis frescoes in the Sistine Chapel.  The masterpieces in the Doria Pamphilj and Borghese collections will be seen, and the genius of Borromini will also be explored at the normally inaccessible church of San Ivo.  All in all, it is a lot to look forward to…

We continue to hope that the Titian exhibition at The National Gallery might just reopen before its official ‘closure’ date of 14 June.  Sadly, due to the continuing uncertainty, we have had to cancel our related Study Day on 13 May and have contacted all those who had made a booking.  Should we be able to rearrange the Study Day at short notice, we will be in touch to let everyone know.  In the meantime, most of those who had booked the Titian day have transferred their booking and related payment to our Study Day on Raphael, to be held on 12 October. 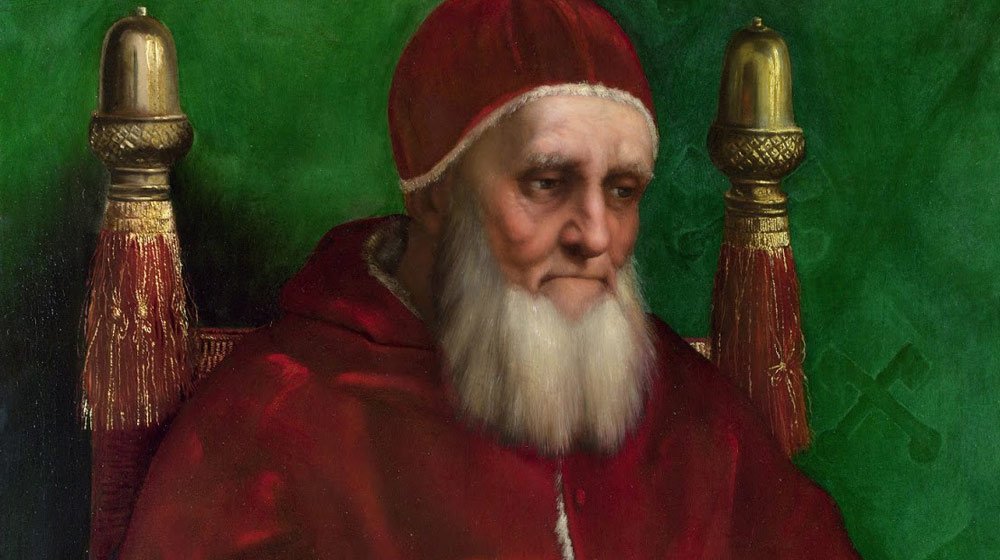 Raphael died in Rome on 6 April, 1520, mourned as no other artist had ever been before, even accorded the unprecedented honour of burial in the Pantheon.  Born the son of a painter in Urbino, he grew up in the midst of one of the most sophisticated courts in renaissance Italy.  Spells spent working in and around Perugia and Florence saw him absorb the work of older men such as Perugino and his immediate contemporaries such as Michelangelo – vital experience on which to build his reputation as the most accomplished artist in early sixteenth century Rome. 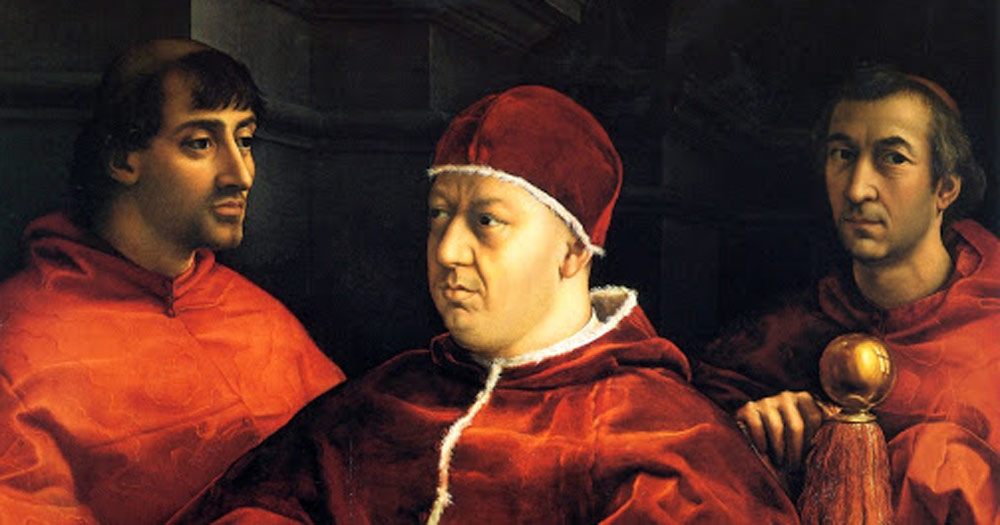 A noisy city, with endless pilgrims thronging the streets, Rome was also a place of opportunity as two extraordinary popes, Julius II della Rovere and Leo X de Medici, commanded a plethora of artists and craftsmen who transformed the city from one shaped by the ancients to one reshaped by the moderns.  Raphael has never had a major ‘overview’ exhibition in the UK before and The National Gallery will in this 500th anniversary year celebrate his amazing talents with Raphael, 3 October 2020 – 21 January 2021, in connection with which I shall lead a Study Day on Monday, 12 October at The Linnean Society, followed by timed afternoon entry to the exhibition. 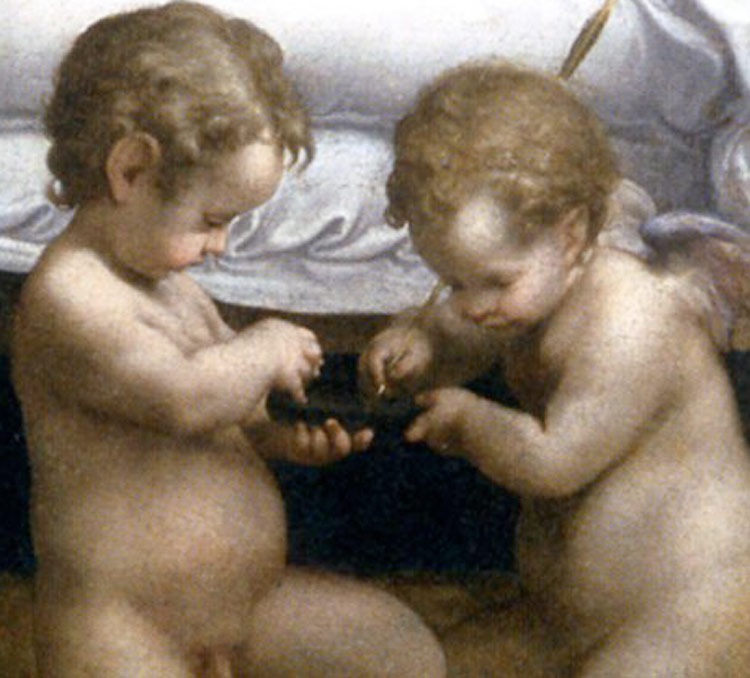 Pictured above is the detail chosen for our inaugural photo competition, for which we received twelve correct entries, one from as far away as Melbourne! The detail was taken from Correggio’s Danaë which is in the Villa Borghese in Rome and the lucky winner is Sandra Egan from Dublin, to whom we send our congratulations, who will receive a voucher redeemable against one of our  future London exhibition-based Study Days. 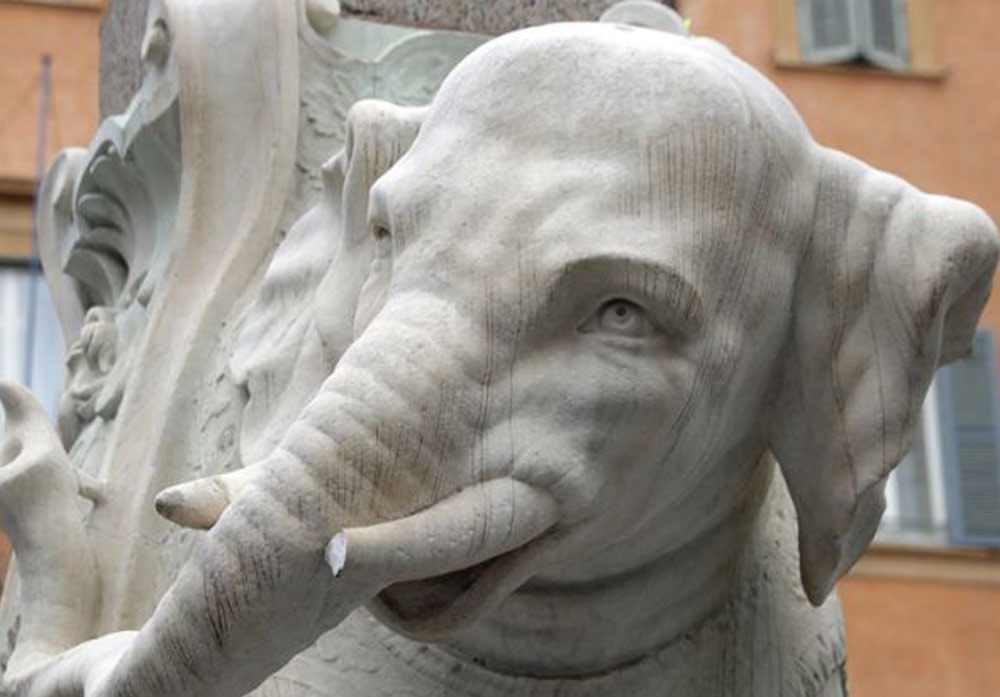 This month’s competition marks a change of medium with a detail taken from a sculpture.  As last time, I need to know the name of the artist, the work’s title and its location.  Entries should be submitted to tomduncan@ciceroni.co.uk or by post to 2 The Square, Aynho, Banbury, OX17 3BL by 5.00 pm on Monday, 25 May.  Good luck to you all!

With all best wishes from everyone here at ‘Team CICERONI’.