Hello from Aynho where our garden, seen above, has been buffeted by strong winds over the last two weeks so the view is indeed 'wind-tossed'. I am delighted to send you our regular monthly e-newsletter, this time with some good news as hopefully we 'turn the corner'. As you will know, the UK government has been slowly relaxing restrictions which affect our ability to travel, first within the UK and now wider afield, as indeed have many other countries in Europe and beyond. This has allowed us to develop our plans for future tours and study days.

As of the time of writing, July 7th, travel to Italy, Spain and Germany is now permitted without having to ‘self isolate’ on return to the UK. This will allow us to operate tours to these countries from September onward. The situation with regard to travel to and from Portugal should be clarified in the next week or two and if restrictions are lifted, we plan to operate our tour Explorers’ Rewards: Lisbon & Sintra, 12 – 17 September.

The first tour we intend to run will be in northern Italy to Friuli Venezia Giulia, 8 - 14 September. Details of this tour, and others in our autumn schedule which have places available, can be found via the link below.

Travel to the Republic of Ireland remains subject to a two-week period of quarantine on arrival, but it is hoped this will be lifted in the next few weeks. If and when this happens, we plan to offer a new tour to Cork this September based at Ballymaloe, with outline details immediately below. As mentioned last month our tour to Dublin and the surrounding counties should also be able to operate, The Harp & Crown, The Irish Country House & Garden, 27 September – 2 October, 2020. Stephen and I will travel to Cork and Dublin as soon as possible in order to visit the hotels, bus companies, houses and gardens to see for ourselves how these tours can operate under the new circumstances. 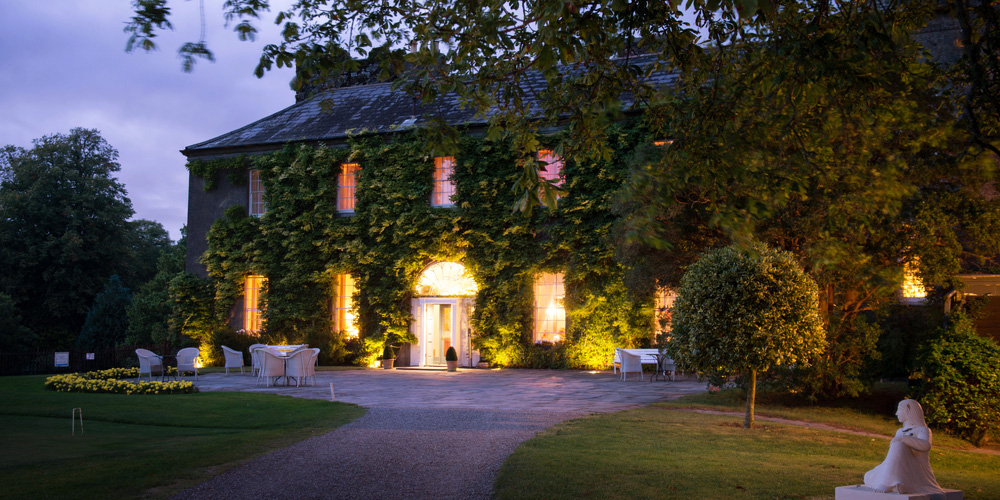 We have organised a shortened version of our usual tour to Ballymaloe: Houses & Gardens of Cork, 23 - 27 September, with a revised itinerary which is now available to view on our website. The pace will be more gentle than normal and I promise that most morning departure times will not be quite so early as before. In addition, I plan to give a series of three illustrated lectures at the hotel, introducing the historic background to what we shall see each day. Given that the hotel has seven separate dining areas we shall be able to dine in style as a group, while maintaining the relevant social distance. Rest assured that the hotel's reputation for superb food will not be compromised. Stephen Brook will join me for this tour as tour manager and it should be a memorable few days. 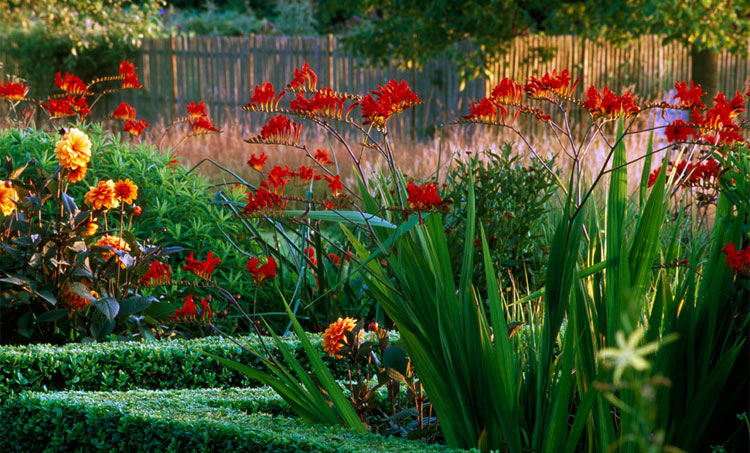 Last September we organised a Normandy Tour for an Arts Society group from Yorkshire which was a great success. So much so that we are thinking of organising a similar tour for members of our mailing list for this September, if there is sufficient interest? Provisional dates would be Tuesday, September 1 to Monday, September 7, based in a comfortable city centre hotel in Rouen. Travel would be by UK coach starting from Ashford Central Rail Station in Kent (where there is ample car parking, in addition to frequent rail links from London and elsewhere) and on to France via Eurostar. The itinerary would include time spent exploring Rouen, Caen and Bayeux with their wonderful medieval churches and associated museums, plus a series of local chateaux and gardens, including Monet’s Giverny and the magnificent contemporary Le Jardin Plume, seen above. If you are seriously interested in joining this tour, we need to know as soon as possible as we will only organise and cost it IF we have a sufficient positive response. Do please let us know…

The National Gallery in London reopens to the public this week, the first of the London public galleries to do so, for which they are to be congratulated. Even more exciting is the news that the wonderful exhibition Titian: Love, Desire, Death has been extended to 17 January next year. I saw it the day before the gallery closed on 17 March and it was truly spectacular. Indeed, you may remember that we had to cancel our London Study Day in connection with this exhibition? As entry to the gallery and the exhibition now has to be booked in advance (please note that admission to both the Gallery and the exhibition are both fully booked up to the end of July), and with severe restrictions on group bookings, we have decided that rather than try to reschedule our Titian Study Day & Visit in London, it would be more convenient if I were to give my two planned lectures as a linked pair of Webinars on the same day. The Titian lectures will take place in a few weeks time, most probably on either August 5 or 12 and we shall let you have further details shortly. This would then allow you to book a visit to the Gallery and Exhibition on a later date and time to suit your individual schedules. 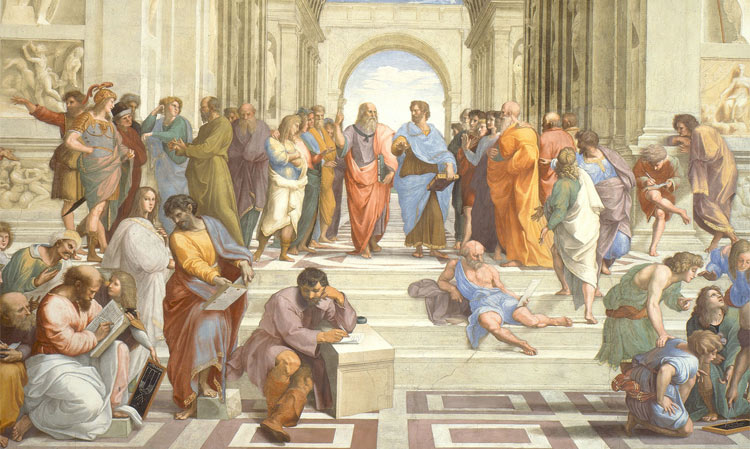 Another casualty of the National Gallery’s closure has been the long-term postponement to 2022 of the much anticipated exhibition on Raphael, in celebration of the 500th anniversary of his death in 1520. We had planned a Raphael Study Day in London on October 12 but as The Linnean Society, the venue for our lectures, cannot confirm when they will reopen, we have decided to move the lectures out of London to a wonderful venue just two miles from our local village, Aynho, almost equidistant between Banbury and Bicester. So, rather than two morning lectures followed by an exhibition visit, I will give three lectures on Raphael & the Italian Renaissance, October 12. This will allow me to present an extended analysis of Raphael’s career tracing his birth and early training in Urbino and his time spent in and around Perugia and Florence before he moved to Rome, culminating in masterpieces such as The School of Athens, seen above, painted for Pope Julius II in the Vatican. I hope it will be a ‘tour-de-force’ on the transition from the Early to the High Renaissance.

Our venue will be ‘A Day in the Country’ at Upper Aynho Grounds, OX17 3AY, two miles outside the village of Aynho and 3 miles from Junction 10 of the M40. Excellent rail connections at Banbury and Bicester can also be used and there are reliable taxis available to and from the venue. You can see more about the 'A Day in the Country' location here. We know it well having rented a cottage on the property for many years before moving up the hill to the village. Initially, given current guidance, we are limiting numbers to 60 participants and we are giving priority to those who asked to attend the day in London. The facilities are excellent and ‘social distancing’ can be easily managed. In addition to the three lectures, morning coffee, lunch with a glass of wine and tea before departure are included in the cost of £79 per person.

Should you wish to turn this Study Day into an opportune short break, we have reserved a number of rooms at The Cartwright Hotel here in Aynho for participants on the Sunday evening before the lectures, October 11. The rate for Bed & Breakfast will be £90 for a double/twin and £80 double for sole use. Your booking should be made direct with The Cartwright Hotel but as it has yet to reopen, we will be reserving rooms on their behalf. Stephen and I will host dinner on the Sunday evening which will be served in two rooms to allow for the relevant dining regulations to be observed. The cost of a three-course dinner with water and coffee, but not including wine, will be £25 per person. It will also be possible to stay at the hotel on Monday, October 12 for the same overnight rate.

You should have received an e-newsletter last week from me with details of our next Webinar Lecture Series? This will be on The Whitehall Group: Charles I & his Circle and the three lectures will be given on three successive Wednesday mornings at 11.00 am, beginning this Wednesday, July 8 with the others on July 15 and 22. Remember that if you do book, you don’t have to listen ‘live’ on the day as once each lecture has finished you will be sent a link which will allow you to view it at a date and time of your choosing. Do book if of interest, via the link below, as it is very popular and we are limited in the numbers who can participate. 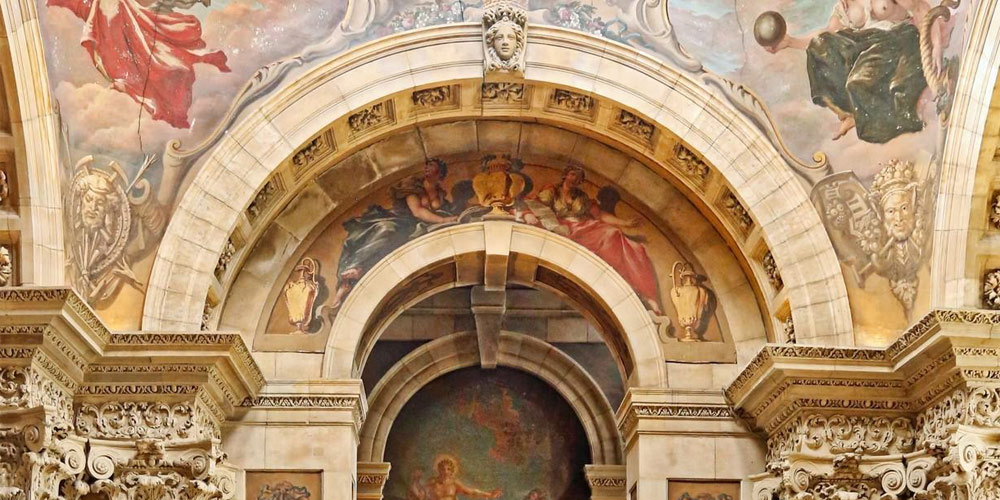 Finally, pictured above is the detail chosen for our third photo competition. To my surprise we had just a handful of correct entries – five to be precise! Many of you thought it was a church in Italy, but the image was taken from the domed entrance hall at Castle Howard in North Yorkshire. The winner this time is Cynthia Fairhurst to whom we send our warm congratulations. Cynthia, as with our previous winners, will be able to attend, free of charge, one of our London-based Study Days once they are operating again.

This month’s competition marks another change of medium with a detail taken from a splendid piece of furniture, a masterpiece of the decorative arts. I need to know the name of the designer, the current name given to the piece and its usual location. Entries should be submitted to tomduncan@ciceroni.co.uk or by post to 2 The Square, Aynho, Banbury, OX17 3BL by 5.00 pm on Friday, 31 July. Good luck to you all!