Pitti Palace, Florence
I have just returned from Italy where James Hill and I have been leading tours to Florence and Rome over the last two weeks. Lest you think we avoided the recent bad weather in the UK, the accompanying photograph shows  Florence’s Pitti Palace firmly closed – as at the first sign of snow the staff stayed at home that morning!  As a result our visit was frustrated.  Luckily, we were able to relocate to the Bargello Museum – dry, warm and full of amazing sculptures by Donatello, Michelangelo and many other renaissance luminaries. We shall be returning to both Florence and Rome again early next year so if you were unable to join us this year, do bear in mind Florence from 11 – 16 February and Rome from 23 February – 1 March 2019. Both sets of dates are subject to confirmation later this spring, when full details will appear on our website
Our newsletter this month has largely been compiled by James, as it features a number of tours to the United States on which he will act as the tour manager. We now have a ‘portfolio’ of U.S. tours including New York, the Hudson Valley, Boston, Philadelphia, Washington D.C., Chicago, Los Angeles and elsewhere, and further cities and historically important areas will be added to future tour programmes in years to come. Guided by local museum curators and experts from institutions such as New York’s Metropolitan Museum and the Frank Lloyd Wright Preservation Trust in Chicago, they are an ideal introduction to the amazing range of art, architecture and horticultural excellence which abounds in the United States. 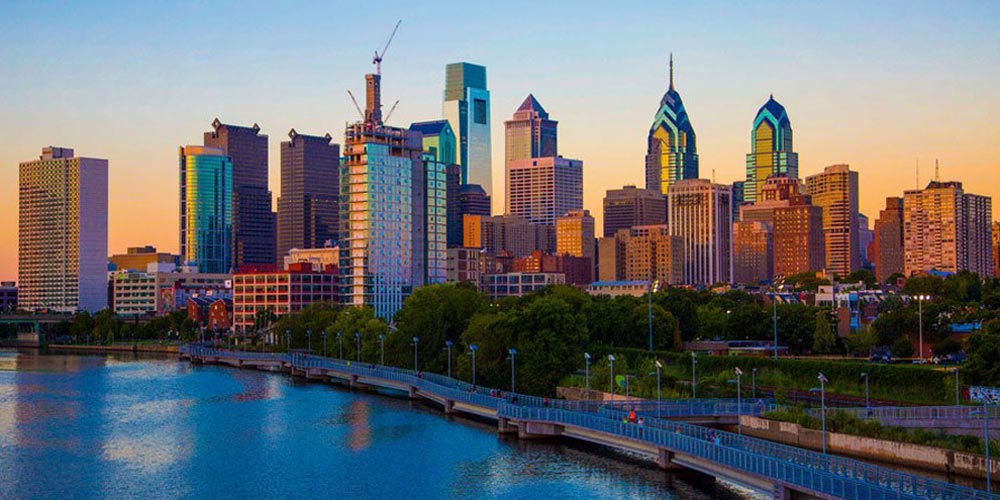 AMERICAN ARCADIAS - PHILADELPHIA & THE DU PONTS
This May we shall visit America’s first true Atlantic metropolis, Philadelphia, pictured above.  American Arcadias - Philadelphia and the Du Ponts 10 – 17 May will introduce America’s capital from 1790 – 1800; a city which contains some of the nation’s greatest picture galleries such as the Philadelphia Museum of Art and the Barnes Collection, the latter of which we shall visit privately. We shall be based just off Independence Square in the heart of colonial Philadelphia, the ideal base from which to explore this handsome city. 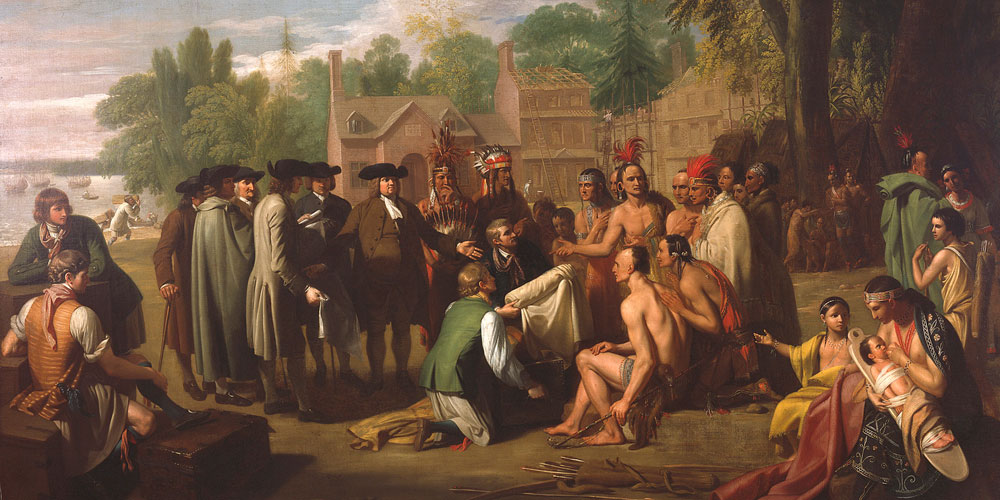 By happy chance, two new exhibitions coincide with our visit. Philadelphia’s Museum of Art hosts Modern Times: American Art 1910-1950. The exhibition traces how American artists challenged convention and met major changes in American society with innovative themes, bold new shapes and vibrant colour. At the nation’s oldest art gallery, the Academy of Fine Arts, an exciting exhibition, First Academies: Benjamin West and the Founding of the Royal Academy of Arts and the Pennsylvania Academy of the Fine Arts, investigates the career and role which this pioneering artist played in helping to found both of these influential art academies, yet on opposite sides of the Atlantic.  His Penn’s Treaty with the Indians is pictured above.  West was elected President of London’s Royal Academy when Sir Joshua Reynolds died; he was also one of George III’s favourite painters and as a Quaker, refused a Knighthood offered by the King. 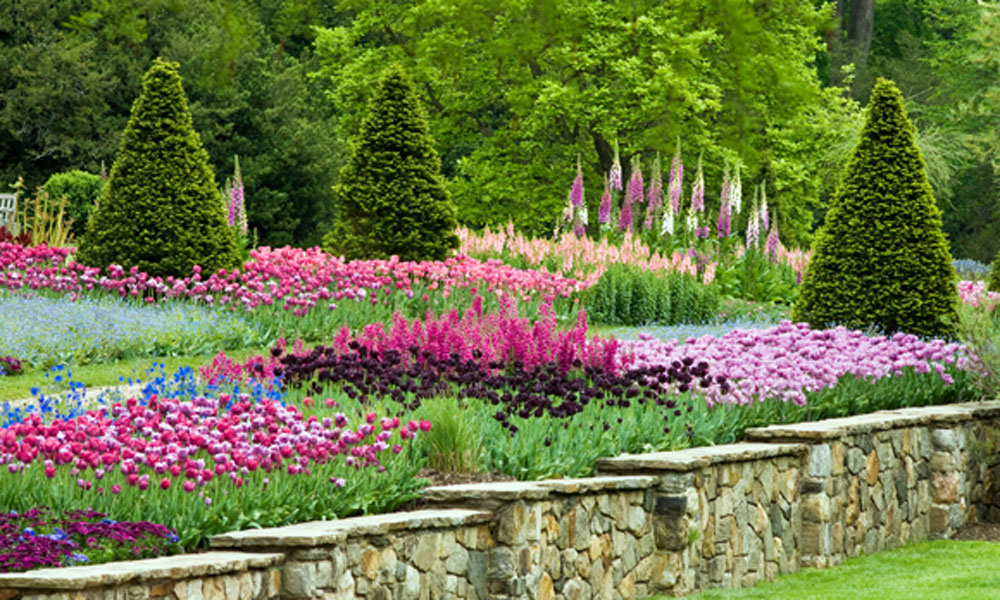 The historical and artistic content will be complimented by some wonderful horticulture with visits to the great gardens at Longwood, as seen above, and the ravishing Du Pont estates at Nemours and Winterthur just into Delaware. 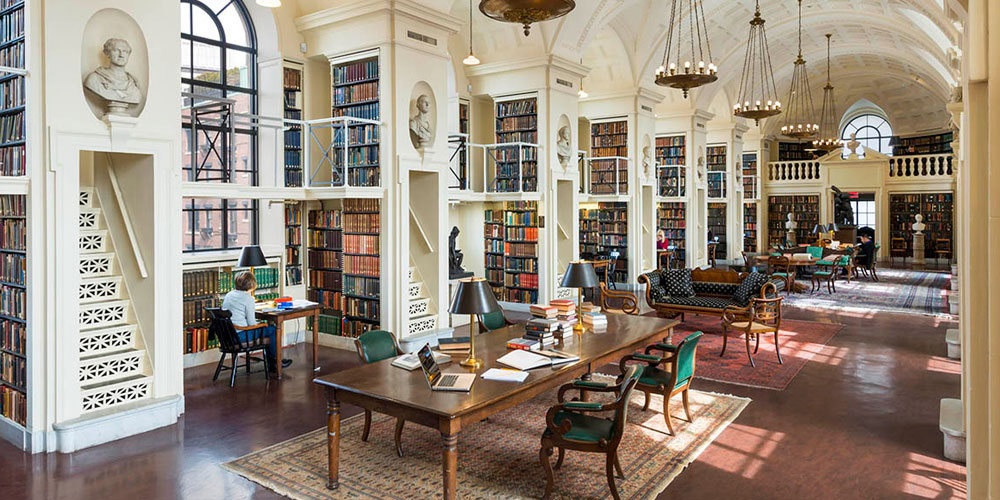 FALL BEAUTIES:  BOSTON & THE BERKSHIRES
Our second visit to the US this year is a long-awaited return to Boston.  Fall Beauties: Boston and the Berkshires, 2 – 11 October will offer participants an opportunity to enjoy the city’s remarkable cultural life at the perfect time, when ‘New England’ is at its most colourful.  The city and its surrounding areas have an unrivalled series of art galleries, museums and cultural institutions including the Museum of Fine Arts, the Isabella Stewart Gardener Museum, the newly refurbished and rearranged Arts Museums at nearby Harvard and the Boston Anthenaeum pictured above.
We are fortunate that Boston’s Museum of Fine Arts will host Casanova’s Europe: Art, Pleasure and Power in the Eighteenth Century, a much anticipated exhibition which we shall include in the itinerary. The works on display will recreate the luxury and splendour with which Casanova, said to be a charming and amorous conversationalist, would have been surrounded in the salons of Venice, Paris and London. The visual riches of eighteenth century Europe will meet the themes of travel, theatre, identity and the pleasures of dining – all hallmarks of a CICERONI tour we hope you might share with us? 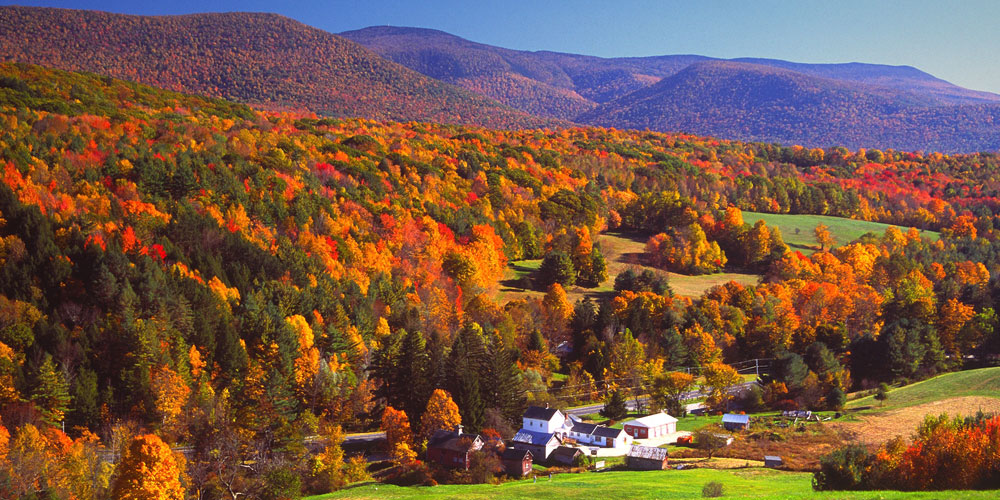 As with our recent visits to New York and Washington, on this visit we shall continue to explore the rural surroundings of America’s great cities. Our visit to the world-famous Arnold Arboretum at Harvard will be enhanced when we move on to the stunning ‘Fall’ countryside of the Berkshires in Western Massachusetts for a few nights, as seen above.  Here we shall explore the life and art of Edith Wharton, Norman Rockwell and the art collection formed by Sterling and Francine Clark at handsome Williamstown.
The linked themes of America and landscape painting reflect the fertile interchange of ideas and sources which are the hallmarks of one of the nineteenth century’s greatest painters, Thomas Cole. Thomas Cole, I sense you asking - who he?! 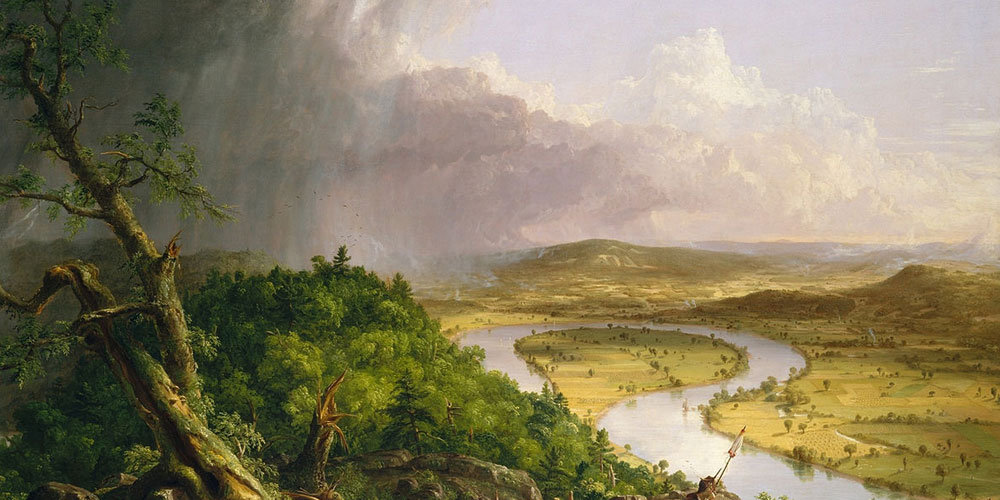 STUDY DAY, THOMAS COLE - EDEN TO EMPIRE
Cole was born in Lancashire in 1801 and arrived in America by 1820. He transformed landscape painting and turned it into a major genre, indeed THE major expression of a newly confident United States. A fine example of his work is The Oxbow, from New York's Metropolitan Museum, seen above.  London’s National Gallery will host an exhibition on Cole, and his sources and influences from 11 June – 7 October later this year. James Hill will lead a Study Day, Thomas Cole – Eden to Empire, September 12, with two morning lectures at The Linnean Society followed by timed entry to the exhibition at the National Gallery that afternoon. Costs: £69; £64 for members of the Art Fund; £59 for members of the National Gallery.
Returning to Italy, you might like to consider joining us there this summer? Operas, Villas, Gardens & Wine – Verona & the Valpolicella, 8 – 13 July will see us return for one of our regular tours combining the best of the arts and opera with the undoubted charms of the surrounding villas, gardens and vineyards. 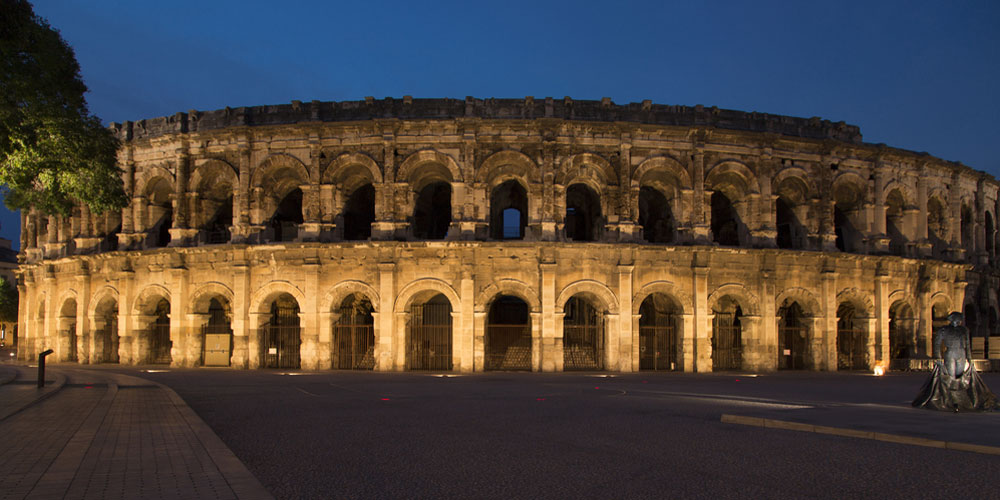 OPERAS, VILLAS, GARDENS & WINE - VERONA & THE VALPOLICELLA
Verona is a most handsome city with some of northern Italy’s finest medieval and renaissance buildings and works of art. Of course, it is dominated by the famous Roman amphitheatre seen above,  home of the annual Opera Festival and this year participants can attend up to three operas, Verdi’s Aida and Nabucco and Bizet’s Carmen, a splendid selection, all of which are dramatically suited to the great stage of the amphitheatre, guaranteeing a series of memorable operatic spectacles. 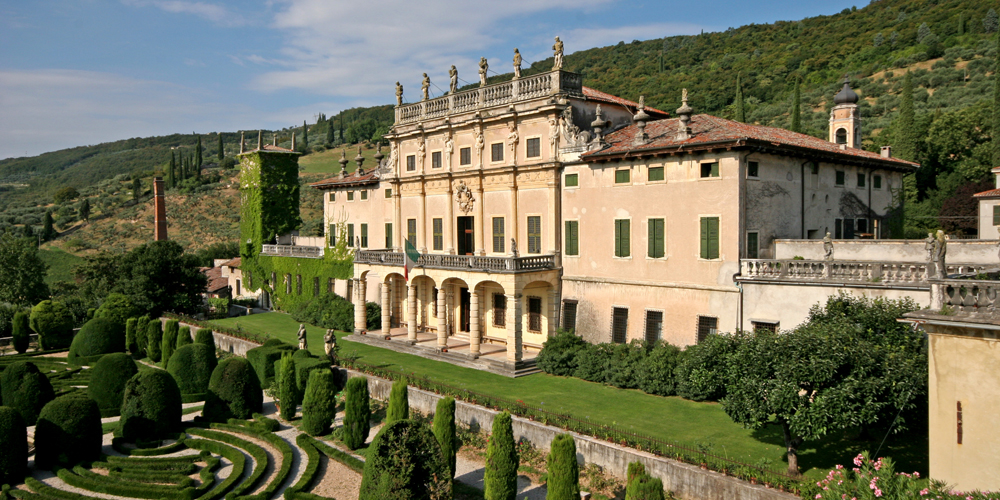 Based just outside Verona at the Hotel Villa Quaranta, it will be the ideal ‘home from home’ and will allow us explore the lovely villas and gardens of the area, in some of which we shall be entertained privately by the owning families, such as the Villa Arvedi, pictured above. 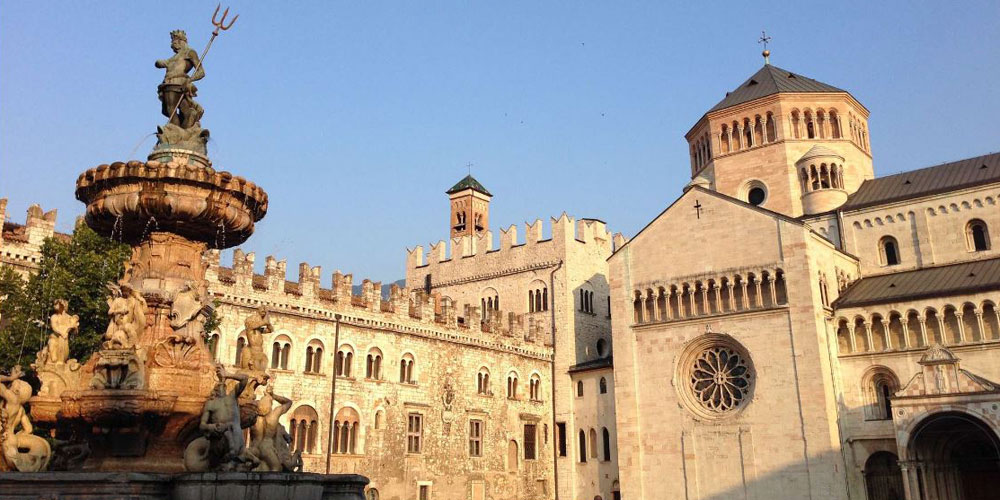 ALPINE PASTURES:  TRENTINO-ALTO ADIGE
We introduce a new tour in late August, Alpine Pastures: Trentino-Alto Adige, 30 August – 5 September. This is a historically important area, now Italian, but not always so. Straddling some of the important routes from the Habsburg Austrian territories into what is now Italy,  the tour will be based in two charming towns, Trento (where the Council of Trent was first convened) and Bolzano, in both of which we shall stay for 3 nights in comfortable 4* hotels.
Trento is very Italian in feeling, while Bolzano is somewhat more Austrian. They have a remarkable range of medieval and later buildings such as Trento's Duomo seen above, reflecting the feudal might of their bishops and local aristocrats. The surrounding scenery is spectacular and late summer is the ideal time to visit. I am very much looking forward to leading this visit, particularly as my new knee should have bedded in, all going to plan. 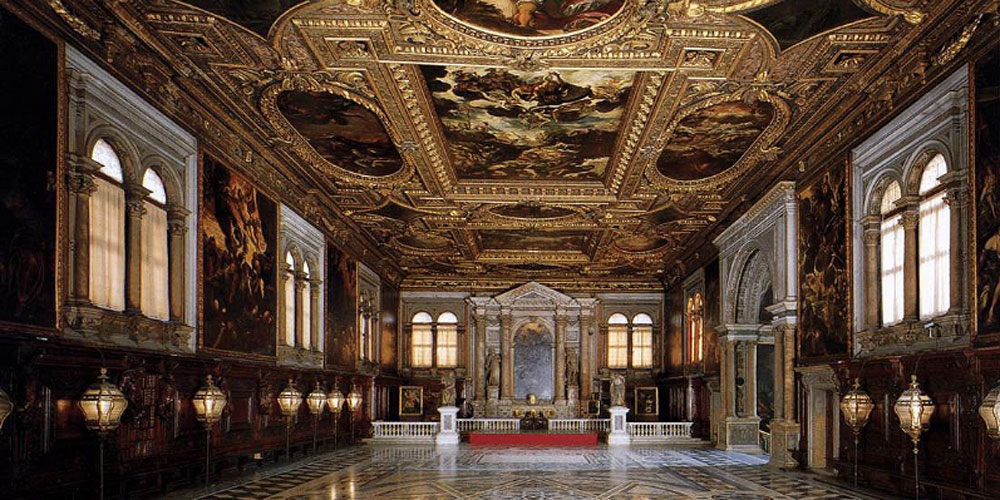 Finally a ‘STOP PRESS’ announcement: one of the great Venetian sixteenth century painters, Jacopo Tintoretto, was born in Venice in 1518 and later this year Venice will host three related exhibitions on the artist and his milieu marking this date. Divided between the Doge’s Palace, the Accademia Art Gallery and the Scuola Grande di San Rocco, this will be an ideal opportunity to explore the life and work of this amazing late renaissance master: ‘I never was so utterly crushed to earth before any human intellect as I was today before Tintoret.’ Such is John Ruskin’s response after visiting the Scuola Grande di San Rocco, seen above, its interiors full of magnificent paintings by this often misunderstood artist. 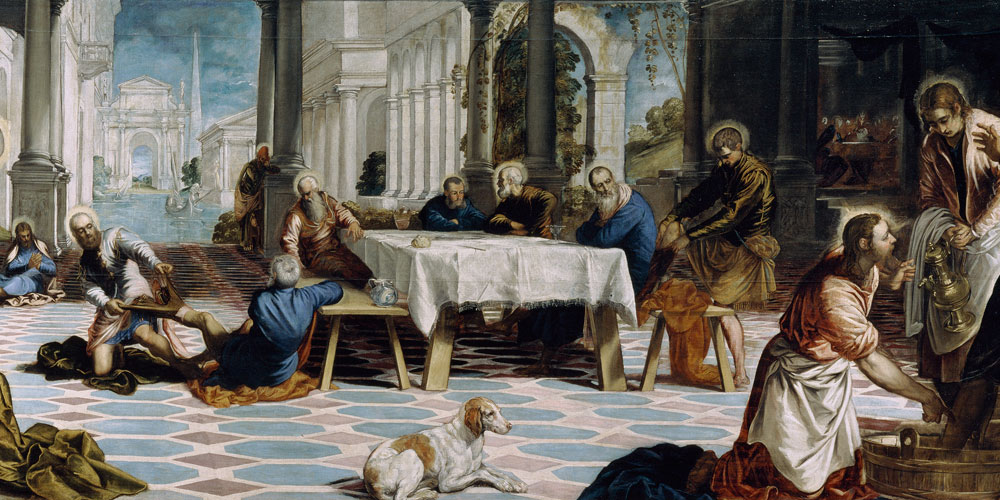 Indeed, I have been guilty in the past of occasionally dismissing him, coloured partly by the large number of works attributed to him but in fact, painted by his sons, who produced far too many works which are decidedly ‘school of’ candidates. That said, with age comes a more mature appreciation of his worth, not least as a result of repeatedly seeing his work in Venice and other collections in the Prado and our own National Gallery, both of which will loan important works to the exhibition.  A splendid example of his innovative style is Christ washes the Apostles' Feet, seen above.
This is too exciting an opportunity to miss, so, we have decided to organise a tour to Venice to visit all three exhibitions plus other sites where he worked, especially the Scuola Grande di San Rocco. We shall also place him within the broader context of artistic developments in mid to late sixteenth century Venice, not least the work of Titian and Veronese. All going to plan, Tintoretto: The Artist of Venice at 500, will take place December 3 – 7 later this year. Full details will appear on our website in a few weeks time. However, should you wish to reserve a place in advance of the publication of the full itinerary and costs, please do get in touch. No deposit will be required before full details are published.
That’s enough for this month, so best wishes from all of us here in our Aynho office.
With best wishes
Tom